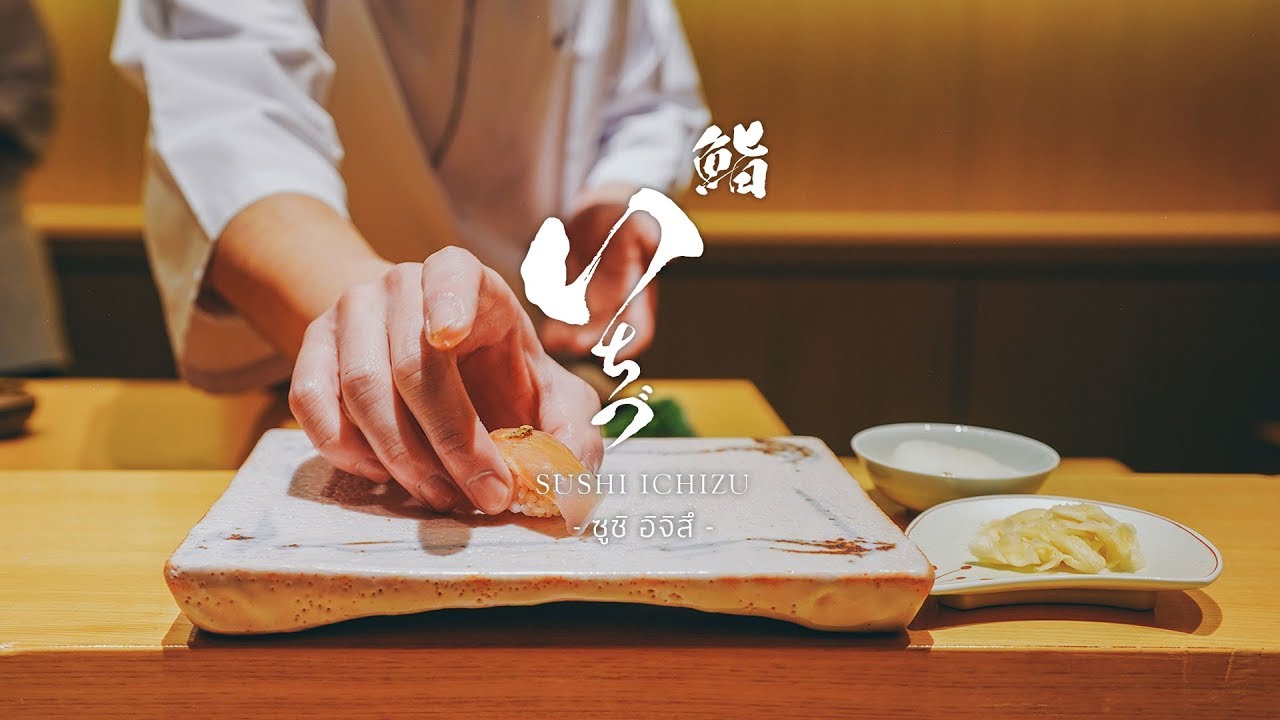 As far as Japanese food trends go, one of the most sought-after dining experiences among foodies is omakase (Chef’s Table) sushi. In these courses, the chef designs the entire menu, everything from sourcing the ingredients to every meticulous step of the preparation.

The phrase “omakase” means “I'll leave it up to you”, so here, the choice lies with the chef instead of the customer.

This Japanese dining style can be really exciting and eye-opening. Aside from being surprised with every new item, you’ll also get to appreciate the traditional art of sushi making. That’s why authentic omakase-style restaurants have become so popular, and not only in Japan.

Originated during the Edo period, the edomae sushi uses vinegared rice in combination with fermented ingredients. We at Siam2nite just had the opportunity to get a taste of the traditional sushi at Sushi Ichizu. The omakase dining spot has been voted #26 on the Top 100+ Asian Restaurants 2019 ranking by OAD (Opinionated About Dining).

Tucked inside a small corner at the end of Soi Sukhumvit 39 was a plain, one-floor building. There’s no indication that the venue houses a restaurant save for a hand-sized wooden sign and minimalist exterior design. Right away, those distinctly Japanese elements told us that this is the place we were looking for.

Sushi Ichizu is divided into three main areas. At the entrance hall, you’ll see a gorgeous bonsai tree. Walking through the door will take you to the welcome lounge and the main dining area, which is a simple, 10-seat bar counter.

It was here that we experienced the omakase-style dining. We watched in wonder as the chef and sous-chef prepare each menu with excellent presentation throughout the one-hour meal. (Sushi Ichizu opens only two times per day at 17.30 and 20.30.)

Before we begin this edomae course, let’s get to know the chef who created it - Riku Toda. His track record should be able to guarantee his talents and convince you why Sushi Ichizu is a must-try Japanese restaurant.

- Toda started his sushi-making career at a very young age. He worked as an apprentice under Hachiro Mizutani, the owner of the three-Michelin-starred Sushi Mizutani. (The venue has been closed since the chef retired.)

- Chef Hachiro Mizutani himself is a student of Jiro Ono, who’s widely recognized as one of the greatest sushi chefs. In fact, the grandmaster was featured in the critically-acclaimed documentary, Jiro Dreams of Sushi, in 2011.

- After that, Toda continued his apprenticeship under Takaaki Sugita, one of the current top sushi chefs. He’s the owner of one-Michelin-starred Sugita and has been awarded a gold medal from the Tabelog website. (The site is famous for its reviews and ratings of restaurants in Japan, not unlike Thailand’s Wongnai.)

- Toda worked as sous-chef at Sugita for a while, before he was invited to join Sushi Ichizu as the executive chef.

The number of items on the menu might vary from day to day, depending on the availability. This is because the restaurant only brings in just enough ingredients for patrons who have booked a seat that day.

What’s more, as everything here is imported from a fish market in Japan daily, you can be sure that the fish are the freshest and of premium quality.

We enjoyed the Omakase Course, which included 17 items. First was the appetizer, Ginnan - salt-roasted Japanese ginkgo nuts. Then, the Hamo Soup was served.

For the second item, the chef made a stock from the bones of hamo fish (daggertooth pike conger) and kombu seaweed. He then added junsai (watershield) before putting some pickled plums on the fish for extra flavor. The hamo is tender and mildly sweet.

The third item was Shiro Ebi (Japanese white shrimp). Marinated in kombu seaweed for three hours, it’s served with some fresh wasabi on top. The springy texture and natural sweetness of the shrimp made a tasty combination with the spicy wasabi.

Next up was Iwashi Roll - sardine fillets wrapped in seaweed. The fish was marinated in salt and vinegar, then aged for two days. It’s served with fresh wasabi and shoyu.

Right after that was Kaki with ponzu or oyster in ponzu sauce; it’s topped with spiced grated radish and chopped Japanese green onions. The oysters were incredibly fresh, as they were super sweet and had no fishy smell. Plus, ponzu sauce added a bit of tang to the mix, which really brought the flavors together.

The sixth item was Nodoguro (blackthroat seaperch), which was broiled until the skin started to become crispy. The chef then added a sprinkle of moshio seaweed salt and served it with a wedge of Japanese lime and some grated radish on the side.

The fish was naturally sweet and tender, its flavors brought out by the slight saltiness. Adding a bit of lime juice allowed each different taste to shine.

This all-white sushi was Shin Ika (baby squid), which had a dab of wasabi inside and sudachi lime and moshio seaweed salt on top. The squid was quite tender, but not without a bit of bounce and firmness.

Next up was Maguro (tuna) imported from Tokyo. For this sushi, the chef used the fatty belly part, known as ōtoro, and aged the fish for seven days. Before it’s served, the fish was broiled with charcoals from Laos. This particular bite was quite sour, but also so soft and succulent.

The next item was Aji (Japanese horse mackerel), which was topped with chopped green onions and grated ginger. The fish has a firmer and springier texture than others as well as a strong aroma.

The tenth dish was Awabi (Japanese abalone). After having been steamed with sake for 6-8 hours, it was served on top of sushi rice and a special liver sauce. The abalone was succulent and sweet - a delightful contrast with the sauce’s slight bitterness.

The Kuruma Ebi (Japanese tiger prawn) was imported from Kagoshima in Kyushu Island. The best thing about the prawn was that you can eat every part of it. The body was parboiled to get rid of the raw smell; it’s naturally sweet, firm, and almost crunchy. The head was then fried to a golden crisp, served with Japanese salt for extra flavor.

The following mini-don was topped with Ikura, a.k.a. salmon roe. The roe was brined in shoyu and served with grated Yuzu peels on top; it struck the perfect balance between sweet and salty.

After that is the 13th item, Kinmedai (alfonsino/golden eye snapper). The fish skin had been briefly torched, so it had a crispy texture and smoky aroma. The sushi was topped with a touch of shoyu and a more piquant variant of mustard called karashi.

Not too long after that, the sous-chef brought out a box to show his patrons the next star ingredient - Murasaki Uni (sea urchin) from Hokkaido. The sea urchin was carefully put atop of sushi rice. It’s rich, sweet, and not at all fishy. For this item, the chef would make each sushi one by one and serve it directly on the patron’s hand.

The Hamaguri Soup was made by parboiling hard clams in a katsuo stock and serving them in clear soup. The dish was quite mild, neither super sweet nor salty; this was to cleanse your palate for the first dessert, Tamagoyaki. The Japanese omelet had a soft, cake-like texture and just the right amount of sweetness.

The Omakase Course was wrapped up with Warabi Mochi. The traditional dessert was freshly made by the sous-chef right in front of the customers. It was then topped with syrup of Okinawan sugar cane, some kinako (roasted soy flour), plus salt-cured sakura petals for color.

The slight sweetness of the syrup, kinako’s rich aroma, and the saltiness of the preserved cherry blossoms made us wish we could ask for one more.

Other than Omakase Course, you can also enjoy the Nigiri Course, which features similarly fresh and high-quality ingredients. It’s safe to say the Edomae sushi experience at Sushi Ichizu will make you want to bring your friends and family to treat them to such an exquisite meal.