Nightlife Reimagined: 5 Things to Look Forward to at the New Insanity Nightclub on Sukhumvit Soi 11

A few months ago, if you drove pass Sukhumvit Soi 12, there was a high likelihood that you would have caught a glimpse of large crowds either entering into or exiting a building lit up in bright green neon lights. Without a doubt, what you would have been witnessing were the last few days of operation for Insanity Nightclub – in its previous shape and form at least. The life of Sukhumvit Soi 12 had decided to pack up and find itself a bigger and better home, a timely decision, as the previous space made it impossible for the club to keep growing and accommodating the bigger and bigger crowds that seem turn up week-in-week-out. After a long and hard search, a new home has been found and in the blink of an eye, a vacant building that was previously St Moritz Club in years gone by and now has been transformed into a clubbing space that could only be described as INSANE – fittingly so.

This new home is located in the heart of Sukhumvit Soi 11. With multiple development projects going on in the soi, those who frequent Bangkok’s nightlife scene will know that it has been a little bit quieter than usual as of late. Commendably, only a few places have been working hard to keeping the once-bustling soi alive. With the addition of the newly reimagined Insanity Nightclub however, somehow the bright green neon lights have gotten people swarming the soi once again. But do not take our word for it, go check it out for yourselves and when you do you will quickly realize why Insanity Nightclub is currently buzzing. For those who may still on the fence about dropping by, let us give you 5 things to look forward to at the new Insanity Nightclub on Sukhumvit Soi 11 that might convince you to go.

They say imitation is the biggest form of flattery and the team at Insanity Nightclub were not shy to let themselves be inspired by some of the best clubs around the world when designing their own space, most notably by Omnia Club in Las Vegas, USA. The world-renown club in Sin City is known for its grandiose kinetic chandelier that weighs close to 10,000kgs and comprises of eight concentric circles. Most notably, the installation moves together with the music and uses its rings to portray lighting effects, video projections, and LED strips in an ever-changing display. But now, Omnia is no longer alone.

Insanity Nightclub reimagined the kinetic chandelier and made it their own. The massive structure hangs high above the dance floor and grooves with revelers all night long giving the Bangkok club a vibe unlike any other. The brighter lights generated by it and the massive LED screens all over the club also allows you to really connect with the people you may be meeting inside. Gone are the days when hiding in the dark is common place – here is a toast to being able to see the beautiful faces of those who you are dancing your nights away with under the lit-up ceiling.

Not only has Insanity Nightclub’s design been inspired by international clubs from around the world, their nightly operations also hold up to international standards. There is a strict lining-up policy that makes sure no more than 1,000 people are in the club at any given time. That means when it is full, it is full and unless someone comes out, you are not going in. This standard policy is long desired in Thai clubs. It makes going out safer in all regards. Second of all, it gives you more space to have fun with your friends and more room to look across the dance floor and spot that one special person that stands out among the crowd. So often when you hit the local clubs in Thailand now, the best dance moves you can pull off is with your fingers. People are so squished because there simply is no door policy. It is time to take back the space to dance, and Insanity Nightclub is prepared to protect that space for you! 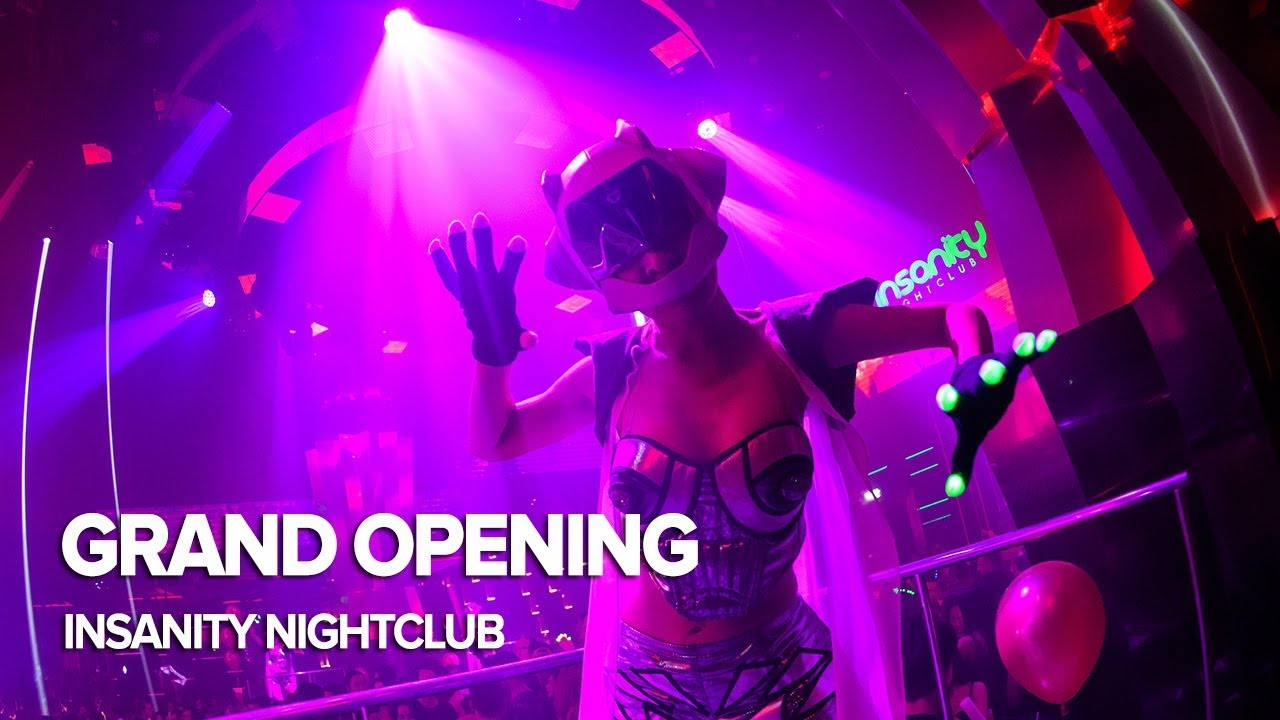 DJ Line-Ups That Ooze in Quality

Housed in a large building that looks like it came out of the streets of Paris with its large pillars and lit up stairs, the grandeur of the new Insanity Nightclub will hit you in the face as soon as you turn up. Forget the inside, the outside itself is deserving of an Instagram moment. And with an entrance that looks made for royalty, only those deserving of making a grand entrance should partake in the nightly entertainment that is on offer weekly.

Adorned on the exterior walls are life size posters of their resident DJs that includes the number 1 party rock crew in Thailand like of the Bangkok Invaders crew, OZMO, and many more. Beside them are the long list of international DJs that will be coming through to leave their own mark. The club has just opened and already big names like Designer Drugs, Rave Republic, Willy Monfret, and even Jeff Retro have been included in the line-up until the end of August! Insanity Nightclub is not playing around when it comes to musical quality that will be coming out of their banging new French-bred L-ACOUSTICS sound system, the only one of its kind in all of Southeast Asia!

With eye-catching visuals, space, and good music all readily available, Insanity Nightclub makes sure that a dancefloor is also prominently reserved for all the party people. Rather than filling the place up with tables, there is space exclusively designed for people to go dance and have a good time. Forget dancing around your tables and just talking to your friends all night, nightlife should be about sharing good times and meeting random strangers. Who knows, you may end up hitting it off and making a new friend in the process. Just like any notable international club around the world, this dance floor extremely welcoming and is ready to make you a star for the night. Of course, if you prefer to just be with your own crew still and dancing with strangers is not your thing, the VIP and VVIP tables still retain exclusive space for you to bust a move.

After Hour Dining Right Next Door

With operating hours beginning every day from 10pm until late, anyone who leaves Insanity Nightclub is bound to be famished when they exit having danced away all their available energy. Gloriously, V8 Diner is opened until 5am and is right in front of the club to reenergize you with anything that your heart and stomach desires. The décor relaxes you and gives you a soothing reminder of how awesome the night was as you sit back and rest in the booths. Of course, the V8 Diner is also the perfect place if you just wanted to spend more time with that special someone you may have just met. This is also the perfect place to have that spontaneous “first date” and close out the night in style.

It is not hard to get carried away and just swoon all over something fresh and new. Insanity Nightclub however, is definitely not that. The club has proven year after year that it is not just a fad and rather it is a movement to be recon with, now more than ever. We are excited, and so should all the night owls that love the Bangkok nights that turn into days.