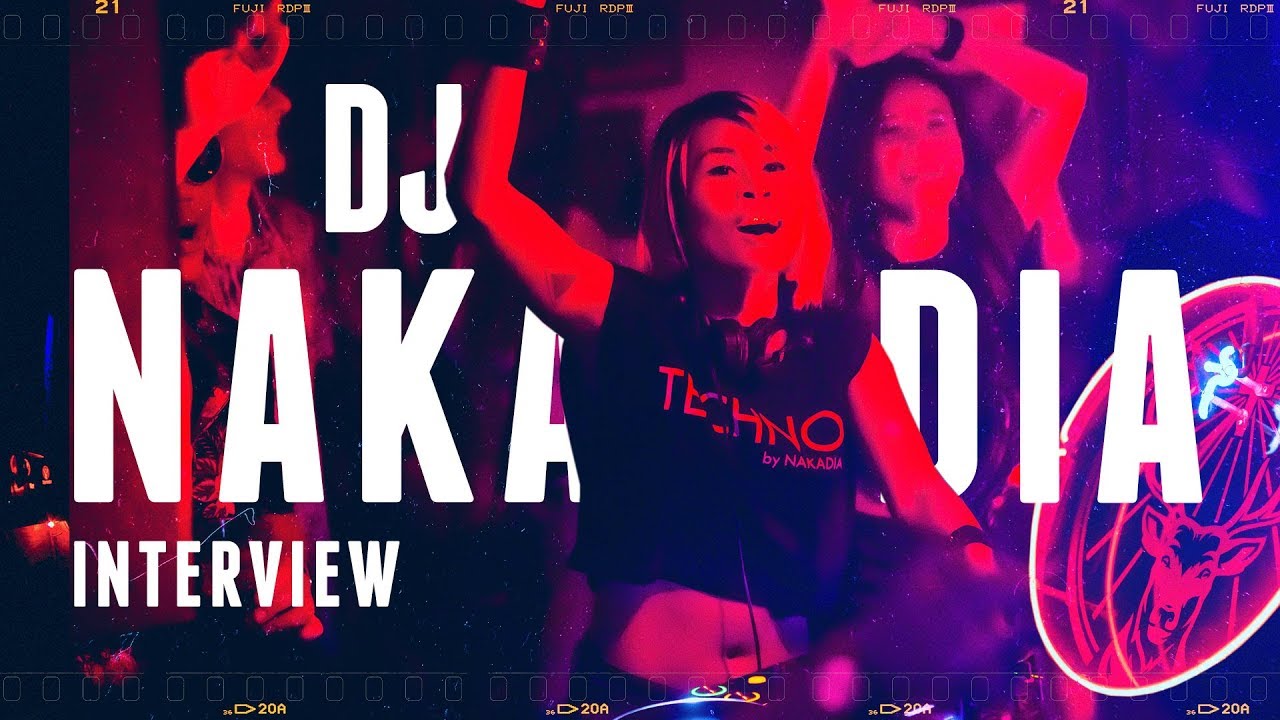 “I’m living out of my suitcase.”

That’s how Seephrai "Pu" Mungphanklang, a female DJ from Khon Buri, Korat (a.k.a. Nakhon Ratchasima), describes her life at the moment. Although based in Berlin, Germany, the DJ travels the world to electrify international techno-loving crowds with her spellbinding sets.

Nakadia has been on a musical career for 17 years. As you may have guessed, it took a lot for an Asian woman to break into the European techno scene in the beginning.

But today most would agree that she’s proven herself by taking over the stage at major events such as Tomorrowland, Rainbow Serpent Festival, Berlin Love Parade, and Queensday Festival, as well as many iconic nightclubs around the world.

Needless to say, Nakadia is well-recognized and loved by her fans and followers.

As she has just come back to her home country to perform in May, Siam2nite has the opportunity to interview Pu - the first Thai female DJ in the world of German underground music.

Let’s get to know the story and woman behind the name Nakadia!

Your first trip to Germany in 2002 seems to be the turning point where you decided to become a DJ. Could you tell us about the trip? What happened?

When I was living in Korat, I worked at an internet cafe. I later became friends with Sebastian, who’s now my manager. He asked me if I wanted to go to Germany; he could show me around and let me see what German nightlife was like.

While I was there, I went to see DJ Marusha. She’s was one of the first female DJs in the 90s to play techno and drum & bass sets. I went to her performance without knowing that she’s famous.

I was in the middle of the dance floor when she started playing, and I was blown away. While she was playing, it felt like she was doing something magical; like she was hypnotizing the crowd.

And I was among those who were mesmerized by her. I decided right then; “I wanna be a DJ”. The next day, I went to a record store and bought some vinyl records.

Have you always been interested in underground music from the get-go? Are there any other genres you also enjoy on the regular?

When I was in Thailand, I listened to mainstream music. After my first visit to Europe, I focused on trance since my manager is a big fan of trance. He asked me if I liked this genre and took me to trance clubs. I loved it; it was new and exciting.

But later, I discovered DJ Timo Mass while he was performing in a city in Germany. I felt more connected to his music because of the slower BPM (beats per minute).

I was curious about the genre, so I started to research and learn more about it. From that point on, my life had changed entirely. This was my world now.

How did you decide on your stage name ‘Nakadia’? Could you tell us about that?

There is no actual meaning behind it. I just kept playing with words. See, my first name is Seephrai. When I started out, Sebastian wanted to create a website and tried to name it Ladyseephrai.com. I told him he couldn’t use that; I don’t like my name since it’s so very Thai. I want it in my passport, but I don’t really want people to know me by that. [Laughing]

While I was at an internet cafe, I kept typing random words until I arrived at Nakadia. It sounds like “Dear naka”, which has a bit of a Thai ring to it. “I’m dear to everyone naka.” - something like that.

My thing is that I tend to go for tracks with more feeling. Sometimes, people who come in for my show would have no idea what I’ll be playing because I play everything from Deep House, Tech House, all the way to Techno.

If I say ‘Techno’, some people would say outright that they don’t like it. They assume that it’s loud and harsh. But there are softer Techno tracks too; it depends on the production.

I dabbled in everything from Deep House to mixed melodic; I kept building up. Before I knew it, I’ve arrived at Dance Techno. This is my signature - I worked with people’s feeling. I can put them under a spell. [Laughing]

Your music when you first started 17 years ago and at present; how has it changed and evolved?

Of course, it has evolved. Being a DJ isn’t about playing popular tracks or keeping a job; you have to enjoy it too. I’ve always believed that my work should make me happy. I need to play the music that I enjoy as well, so I keep finding my style.

As I’ve mentioned, I played Trance in the beginning. Then, I moved on to House, Funky House, and Electro House. I kept looking until I found my current style.

What are the challenges of being a female DJ on a global stage?

I was an Asian DJ who was trying to get into the European scene. At first, a lot of venues wanted to book me despite me being not famous. However, these venues tended to be on the fancier side.

That’s not really my style; I’m more of an underground kind of girl. I wasn’t a good match, but they wanted to book me because I have an Asian look. It’s novel for them since I was the first and only one.

That made it difficult. In the underground scene, people liked an ‘unkempt’ look, like you haven’t washed your hair in almost a week, with just a T-shirt and a pair of jeans.

I had to adopt a tomboyish look as much as I could to get some respect. But I still wanted to wash my hair and dress up a little bit. [Laughing] Things didn’t fit right; I tried really hard to find myself back then.

I had to change my look and made it very simple. It was worth it, though. Because I got respect by the time I started moving upward in my career.

If you were to choose the mix that best represents Nakadia, which one would it be and why?

All of the mix in my Soundcloud represent my style. You can give them a listen. [Laughing] It’s all a journey.

We’ve heard that you’re releasing a new EP. Could you tell us about your work process for the EP?

I was traveling a lot last year, so I had to find the time to go to the studio as much as I could. I hadn’t been home at all. I performed, traveled, produced tracks, then went back on the road. This year, I finally released my first EP under Filth on Acid in January, then later under Intec Digital. I think you could say both of them are major records.

You’ve been to major events all over the world. Which one is the most memorable for you?

I think a lot of them are memorable, actually. For example, I’ve just performed at Rainbow Serpent Festival in Australia in February. It was a four-day event, so like a non-stop, four-day party. People there really understand and appreciate music.

A lot of my friends were excited, while I had no clue how big of an event it was. When I arrived, I was like “wow, this is so cool”.

Everyone dressed how they want and went completely bonkers. I didn’t warm up the crowd or anything; I went for it right from the first track. [My performance] was overwhelmingly well-received. When I walked around the city later, people recognized me and greeted me.

Also, any time that’s the first is always great; I’ll never forget those. Once, I performed in Colombia in South America for the first time, in the city of Bogota. Usually, the show would last three hours. When I got to the club, however, it was already full of people.

Everybody seemed ready for it, so I jumped right in. The crowd wouldn’t go home. Then, the staff informed us that there’s an after party on the rooftop. I brought the show there for another two hours until the sun came up.

You’ve been to Mustache Bangkok for three times already. Could you tell us what’s so special about this time?

I’ve always loved performing at Mustache Bangkok - it’s such a blast every time.

I don’t plan my sets, and I don’t know what my set would be like each time I play. It all depends on my feelings. Maybe I’m feeling a bit funky today, then I might switch to house, tech house, and techno.

The set i played this time is very different compared to the previous ones, though, because we were short on time. I didn’t warm the crowd up too much and just went at it. [Laughing]

I produced a lot of tracks last year, and I’m still working on them this year. After my Asia tour, I’ll be back in the studio to work on these tracks.

What would you like to say to the event’s sponsor, Jagermeister?

Thank you so much for sponsoring our party. We all had a great time together. [Laughter]

Follow Seephrai “Pu” Mungphanklang a.k.a. DJ Nakadia and her work on her social media down below.